Of the four major archangels, Uriel is the least known or written about; this can be attributed to two causes.  Little literature or commentary exists about Uriel because Uriel is an archangel of non-canonical lore that in early Jewish texts was referred to as Phanuel.  Uriel also has a vibration that few humans truly understand.

Uriel is Hebrew and means: God is my Light; God is Light; radiation of God; God is the radiating principle of Light; fire of God.  When one positions Uriel as guardian of the West (emotions, the heart) one can put in perspective Uriel's unique vibratory pattern and gift to all.  Uriel's legendary acts, appellations and symbols become cohesive when viewed from the West. 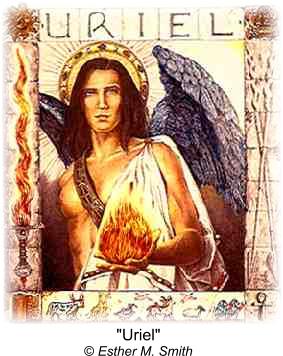 Legend tells us that Uriel stands at the gate of the Lost Eden with a fiery sword.  The Lost Eden is a term describing forgetting to Love God.  The fiery sword shows that negative matter (selfish and unpure desires) are destroyed when one truly focuses their love on God.  In this legend Uriel reminds humanity to Love God by using the "fire of God" (by using the fiery sword).

Uriel is sometimes described as the Archangel of Salvation.  Uriel teaches the path of the heart, the fire of pure Love. Without this pure Love and devotion to Spirit, all spiritual study remains an intellectual pursuit, fairy gold.  This understanding of true spiritual study is further supported by the tradition that Uriel brought to Earth: Alchemy, the heavenly arcana and was the giver of the Cabala to man.

It is through Noah's devotion and Love of God that Uriel is able to warn him of the flood.  Noah's pure love and devotion was the telephone number of Uriel.  If Noah had been unable to express divine love and devotion to God, he would have been unable to hear Uriel's warning via the cosmic phone.  This is how another attribute associated with Uriel has arisen, the attribute of Divine Vengeance and Judgement.  Only if the heart is ignited in devotion to God can one hear Yahweh's call.  If one does not hear Yahweh's call, one will perish (get caught in the flood).  Without Yahweh's guides and messages, one cannot find the Eternal Light.  Uriel is said to have been the interpreter of Ezra's visions which also explains why Uriel means "God is the radiating principle of Light."

Uriel's symbol of an open hand holding a flame depicts a great gift to humanity.  It is the flame of Love to ignite the heart in service to God.  Uriel holds out the flame of Love towards all souls.  The soul by filling with the flame of Love becomes devoted to serving Yahweh's plan.  Uriel's flame of Love, the fire of God, the Light of God, purifies emotional and mental understanding transmuting the lower vibrations into frequencies that can assimilate Spiritual Understanding.  The planet that Uriel is associated with is Venus, the planet symbolizing love.


This article is an excerpt from Rev. Kythera Ann's book, Songs of Light

If you wish to purchase Songs of Light (book & tape or CD)  click a button below: